A Life of Action and Adventure

These are the memoirs of Ben Lans, who joined the Army as an officer cadet with little military background and a vague military ambition to work with soldiers and seek adventure. It is a story of action and adventure during postings at home, overseas and on operational deployments…of mateship developed through shared experiences and the bonds of comradeship found in the services. It is a story that shares personal moments and humour in an environment that promotes loyalty, lasting friendships and memorable events.

Ben shares special moments of his career as he develops from a young and inexperienced officer sent to serve on operations in South Vietnam, into a leader and training developer. In addition to his Australian regimental postings, he served with, and as part of, the British Forces in Singapore in the days immediately after its independence. He shares his experiences gained during those post-colonial days of Singapore, in the early 1970s, the dawn of the new Asian age, and during training in the deep jungles of the Malay Peninsula, where elephants and tigers survived to threaten the unwary soldier. Later, as an artillery analyst in the mid-1980s, seconded and fully accredited to work for the UK Ministry of Defence in London as principal adviser on Soviet and Warsaw Pact artillery to the UK Ministry of Defence, he describes his role as part of the intriguing world that was the western intelligence community during the Cold War.

These memoirs reflect the scale, danger, risks and satisfaction associated with the planning and execution of major expeditions, such as a survival exercise on the relatively untravelled Mitchell River from the Atherton Tablelands to the Gulf of Carpentaria and whitewater adventures on major east coast rivers such as a first descent of the Herbert River in North Queensland. Ben ‘s philosophy was to include as many of his soldiers as possible in an attempt to promote group dynamics and introduce an element of danger that was missing in the training methods of the day.

The memoirs feature a detailed and riveting story of adventure and survival on Tasmania’s Franklin River, in 1980, before the river became well known to adventurers and world famous for its environmental significance. A major part of the book is dedicated to the adventures and some of the near life and death experiences of the men who served in Ben’s Battery, in their attempt to paddle the river in three separate groups in the days when not a great deal was known of the savagery and remoteness of Tassie’s wild rivers, especially for a bunch of soldiers from Townsville in Far North Queensland. Such was the drawcard of Tasmania’s wild rivers that the Army allocated a troop of helicopters to support the activity, and Australia’s ‘outdoors industry’ provided generous sponsorship and equipment. The trip featured some spectacular rescues and most of the major newspapers on the east coast, including the Weekend Australian, featured detailed articles supported by photographic spreads.

Ben thrived as a field officer and many of the memoirs are first-hand accounts of working with, and learning from, the soldiers under his command during the various regimental and instructional postings. These memoirs reflect the challenges and satisfaction of a life in the military, and adeptly unravel the perceptions that many associate with people in uniform, tackling and sometime making fun of the ‘military-isms’ that abound about the Army and demonstrating to readers that the Army was, and probably remains, an organisation with everyday people who have real and everyday feelings and emotions.

Ben is the author of a wide variety of Australian/US joint studies and Australian Parliamentary submissions and papers including major contributions to Defence White Papers since 2001. He joined the Army in 1968, attended the Officer Cadet School at Portsea in Victoria and graduated to the Corps of Royal Australian Artillery. He served on active duty in South Vietnam in 1971. He was posted to Singapore in 1972-74 as part of the Australia, New Zealand and United Kingdom force which formed a part of the Five Power Agreement including Singapore and Malaysia.

He attended Command and Staff College at Queenscliff, Victoria in 1984, followed by a posting to the Ministry of Defence in London as the UK’s principal Soviet artillery analyst and adviser. His final posting as a regular officer was Head Weapon Systems, Defence Technical Intelligence, Defence Intelligence Organisation in Canberra. Ben resigned from the Regular Army in 1991 as a Lieutenant Colonel. He and his wife Lo moved to Tasmania in the mid-2000s to follow their love of the outdoors. After leaving the Army he continued to provide consulting services to the ADF, including capability development and the planning of joint Australian/US Defence training.

A group of hapless Junior Class cadets during ‘Revenge’, having been given live chooks to eat after two days of no food at all. The task of killing the chooks, preparing them and cooking them in the midst of a snow storm was a challenge. Photo: Hugh Polson

Captain Ray Cook and Major Alan McClelland overlooking the 50 metre waterfall that was (improbably) missed during the helicopter reconnaissance of the river. The canoes were portaged along the shelf to the left of the smaller shute of water and lowered down using ropes. Photo: Author.

With Captain Craig Stevens and Captain Ray Cook at Richmond Airbase discussing options on hitching a ride to Townsville on a RAAF Hercules aircraft.Photo Reginald Lans 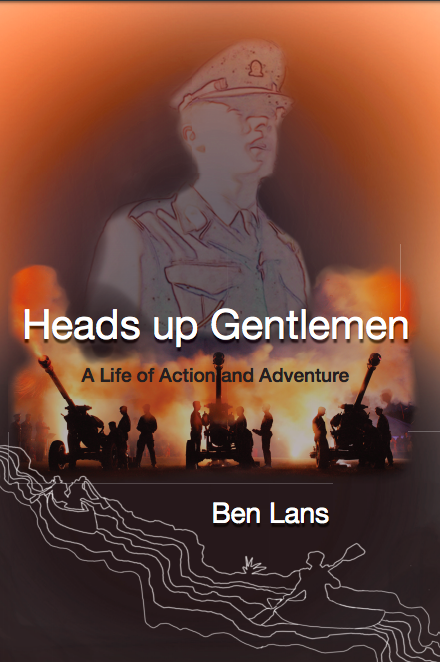