This book ends debate about the possible existence of a fabulous gold reef that “Harry” Lasseter claimed in 1930 he had found in Central Australia as a young man, famously prompting a well-funded expedition to go in futile search of it at the outset of the Great Depression.

While other writers have previously disproved aspects of the life story that Lasseter claimed for himself, none has adopted the chronological biography approach which shows so sharply the pattern of behaviour that leaves no room for doubt: Lasseter was a compulsive delusionary liar, constantly demanding the attention of figures in authority for his own personal benefit.

Far from the honest working man battling to get the ‘square deal’ that he claimed was his due, Lasseter revealed himself time and again as a persuasive poseur full of big ideas that were usually impractical, unoriginal or founded on empty promises. While argument might continue to focus on what motivated the figures who joined in promoting his reef story, there remains not a shred of doubt that there ever was any gold.

Chris Clark now lives in Melbourne but for 40 years he worked in Canberra as a public servant and historian, having produced numerous books of mainly military history (most published as Chris Coulthard-Clark).

His defence-related books include several biographies, a history of Duntroon military college, a volume in the official war history series covering RAAF operations in Vietnam, a history of Australian Defence Industries, and the Encyclopedia of Australian Battles (now in its third edition).

His new title on the Lasseters Reef mystery follows his previous book with Echo Books (Olof’s Suitcase, 2015), which broached his family’s connection with the story but withheld an opinion on the question of Lasseter’s credibility—a deficiency he has now definitively addressed. 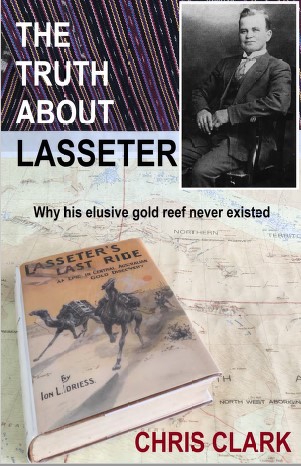