The Politics of Consciousness

In early September 1943, Italy capitulated to the Allies. Australian prisoners of war, POWs, seized this watershed moment and snatched supplies before walking out of Italy’s rice farms scattered on the Piedmont plain west of Milan.

Escapes were mostly easy but freedom was vexed. The ultimate challenge for escaped POWs was to navigate and to outlive the volatile context of post-armistice Italy beyond their prison camps. Wearing uniforms or a motley clash of civilian cast-off clothing, escapers had a price on their heads as they headed north towards alpine passes and neutral Swiss territory, or as they wandered in search of advancing Allied Lines in south Italy. During their treks through mountains, valleys and ‘freedom trails’, Australians teamed up with New Zealand, British and South African POWs to dodge German and fascist militia and to take up arms with fledgling Resistance brigades. Not all escaped POWs survived.

At its heart, Shooting Through highlights a unique shared history between Australian escapers and the Italians who risked severe retributions to host and guide the POWs.

Drawing extensively on first-hand accounts sourced from Australian and British archives, as well as memoirs and oral accounts by ex-POWs and Italian witnesses, Katrina Kittel weaves the stories of thirty escaper groups through time and theme to reveal key evasion routes and the various outcomes that befell escaped POWs in Italy. The veterans’ accounts burst with humour and compassion as they offer their insights into Italy’s war. From her perspective as a graduate historian and as a daughter to a former POW, Katrina Kittel has uncovered a richer story behind the few enigmatic details that her father, Colin Booth, and many of his fellow POWs chose to share with their families.

Shooting Through includes a nominal roll of Australian POWs interned at the Campo 106 rice farms as well as a roll of New Zealander POWs who escaped camps to reach Switzerland.

Shooting Through includes a foreword by Professor Peter Monteath.

For all media, publicity, event and general enquiries, please head to https://katrinakittel.com.au/shooting-through/

Radio interview on ABC's 'On Drive' with Fiona Wyllie. The story of the Australian Men who escaped war camps in Italy.

Review published through Inside Story. Behind fascist lines.

Review published on the Camp 59 Survivours website. Shooting through — Stories of Campo 106 Escapees.

Katrina Kittel has quite literally followed in the footsteps of those men like Col Booth who, when confronted with one of the most vexing questions of their lives, opted to ‘shoot through’ and find their way to freedom. In search of the stories of countless others she has tracked down the descendants of others to piece together a great web of escape and survival stories. And on top of all that, she has trawled archives and libraries to ensure that this book is not just a remarkable tale, but a true one. It defies the imagination, and it satisfies it too.

Praise for Shooting Through

From Alamein to the Alps, this book tells a tale of captivity, survival and escape, shining a light on the oft-neglected experiences of Australian POWs in Italy.
— Lachlan Grant, author of Australian soldiers in Asia-Pacific in World War II

This work, describing the experiences of Australian POWs of the Italians during WW2, addresses everything from their capture through to repatriation and its aftermath. The material presented is insightful, balanced and respectful. Its strength lies not in emotion, but in presenting a window into the soul and decision making of the POWs in their relationships with themselves, their fellows, guards and the Italian populace. The author has redressed a neglected area of our military history…I rate this as the best account of the overall POW experience that I have read.
— Major (Ret.) Warren Farmer

Thoroughly researched and beautifully written….Kittel draws on her own father's story and those of his wartime colleagues to explore the ANZAC narrative from a fresh perspective. Insightful, thoughtful and compelling, Kittel's account eschews glorification and instead illuminates the experiences of ordinary men in extraordinary circumstances.
— Michelle Scott Tucker, Elizabeth Macarthur: a life at the edge of the world

For more about Katrina including her publications, media activity and a list of selected in-store booksellers, visit katrinakittel.com.au/

Shooting Through is listed with Booksellers NZ, the membership association for bookshops in Aotearoa New Zealand. Shooting Through: Campo 106 escaped POWs after the Italian Armistice. 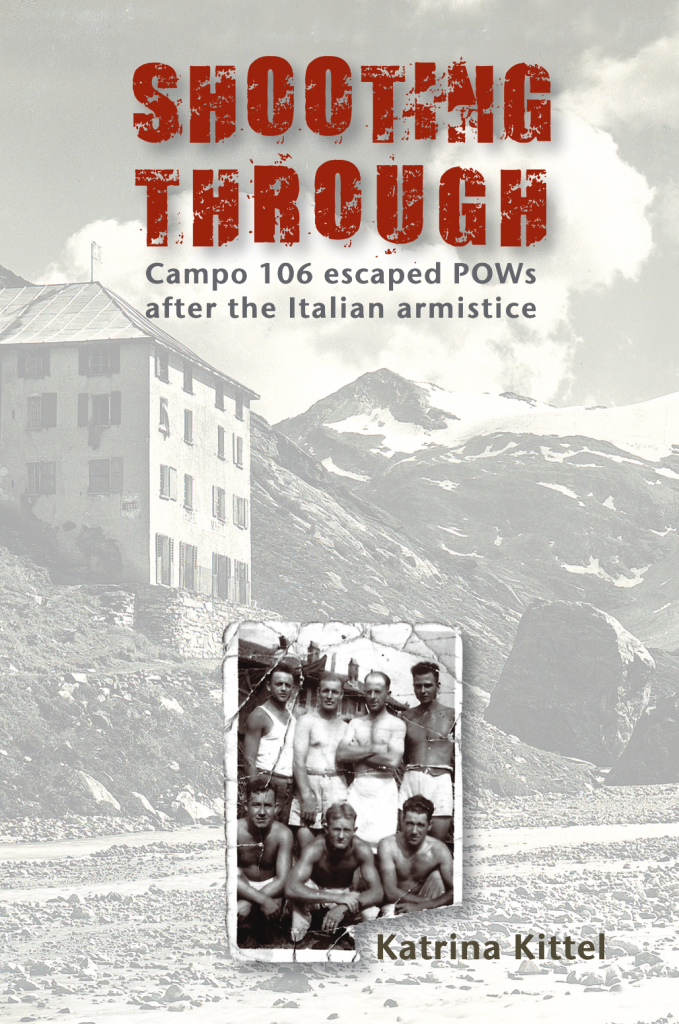 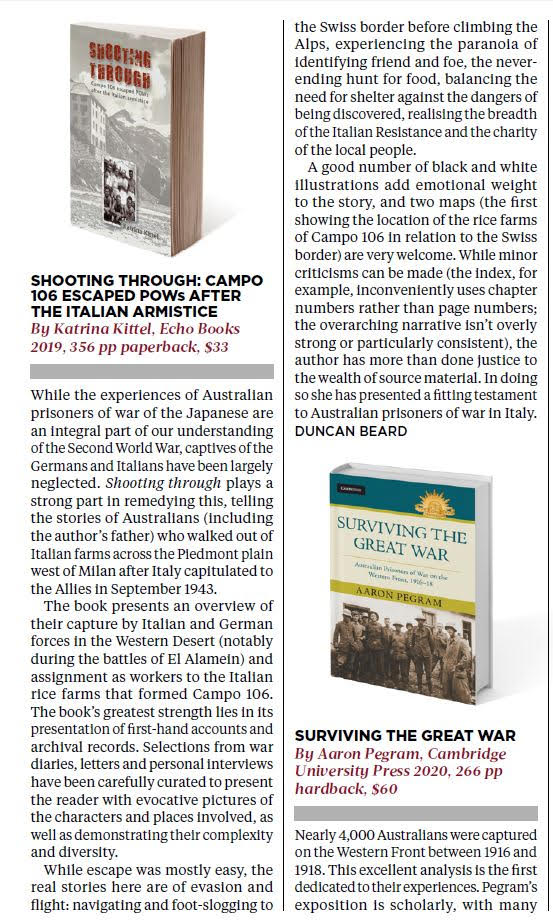