Stolen Moments of our Young Lives

The Spitfires and Australians of 453 (RAAF) Squadron over Normandy

Ready to Strike is the story of the only Royal Australian Air Force squadron to operate from airfields built immediately behind the front lines of the Normandy battlefield after the landings in France of June 1944.

453 (RAAF) Squadron was a ‘for war only’ formation. Ready to Strike covers the period from the Squadron’s formation in May 1941 to the end of the Normandy campaign in August 1944.

This group of men were bonded by war and their love of flying. There are moments of excitement, pain, suffering, fear, boredom and laughter.

The experiences and operations of the squadron are presented in detail, using many quotes from the pilots and data from their logbooks. The book is fully referenced with chapter end notes and a bibliography.

The Australians were in Normandy too - this is their story.

For more information, or to learn more about the author, please click here.

Highly Commended in the Literature Division of the 2018 RAAF Heritage Awards.

On the 6th of July 1944 RAAF Squadron 453 pilot Norm Baker was on an armed recce over Normandy in his Spitfire (MK260) when he strafed an enemy truck from a very low height. His plane was hit by shrapnel and he crashed landed only just avoiding the waiting Germans. Over the next six weeks until he escaped to the Allied lines he was hidden in plain sight by French civilians as he pretended to be deaf and mute as a result of shell shock. Baker’s incredible luck to survive and fight again is but an addendum to the complete history of the role RAAF Spitfire Squadron 453 played in the lead-up to D-Day on Normandy and the crucial months after the landing.

Ready to Strike is Adam Lunney’s first book and what a spectacular start to hopefully many more historical tomes. The depth and breadth of the research and detail in this military history is breath-taking. He retells the story of the many courageous, mainly Australian pilots and ground staff in Squadron 453 recovering from almost total annihilation by the swarming Japanese in Burma and Singapore. Reformed in England in preparation for the liberation of France on June 6, 1944 Lunney reveals to the reader the very personal lives of many of the Australian pilots practicing in the Spitfires and occasionally dyeing in training accidents. The uncompromising bravery of these men is unforgettable.

Lunney also gives the reader a complete understanding of the Spitfire from its genesis to the crucial part the aircraft played in the changing the tide of the war. His man crush on the Spitfire is apparent as is his respectful, accurate and exhaustive particularizing of the lives and at times death of the men of Squadron 453. Lunney brings the men back to life through their letters home to family and from many, many Personal Combat Reports the pilots filed following their individual missions or ‘sorties.’ The laconic tone of some of these reports detailing the death and destruction of the enemy and sometimes the witnessing of the loss of their own is gripping reading.

But war is hell and Squadron 453 was not spared from the misery of it. Between June 1942 and August 1944 20 pilots were killed in training accidents or by friendly fire and by the enemy. After an almost unopposed number of missions over the Normandy beaches from June 6 to 11, 1944 Squadron 453 continued to patrol the sky over western France.

On a sortie on June 11 Henry Lacy Smith of San Souci, Sydney was flying his Spitfire (MJ789) over Caen when it was hit by flak. He radioed, ‘I’m going to have to put this thing down in a field.’ The plane was seen by other pilots to crash into water in the Orne estuary and flip over onto its back. Smith was not sighted after that.

Sometime later he was presumed dead. His English wife of a few months, Edna was given the bad news as was his family in Sydney. But 66 years later in 2010 a French family saw part of the tail of Smith’s plane poking out of the water at low tide. Henry was discovered in the cockpit, drowned. His body was recovered and given a full Military funeral and now lays at rest in Normandy.

Interestingly, the 453 Squadron crest includes a Kookaburra perched on high, alert for prey below. The crest motto, Ready to Strike, perfectly captures the spirit of the men of Squadron 453. Lunney ‘s faithful retelling of their complete history makes your heart swell with pride.

While released in late 2018, this book has arrived amid renewed interest in the Normandy landings as the 75th anniversary comes and goes. The first Australian unit on the ground in France was 453 Squadron and its Spitfires.

While no stranger to the European theatre, this was the squadron’s second iteration following its decimation in Malaya and Singapore. Reformed in Scotland, it was, effectively, just another Spitfire unit building a cadre of experienced pilots. After supporting the landings from the UK, the squadron began a frenetic existence operating from France, flying ground attack, escort and interception work. The pilots performed well in rare encounters with the Luftwaffe.

The book finishes its look at ops as August 1944 closes. That said, ‘Normandy’ doesn’t kick off until page 163, the preceding pages committed to the unit’s earlier history and a well-written analysis of the Spitfire that avoids the expected stereotypes and emotion, respects the design, and humanises it all with choice quotes. The Far East history is not the most sparkling of openings, there’s a lot discussed in short order, but this is quickly forgotten as the reader progresses through the Spitfire chapter. From there, the operational history is very nicely handled. While, at times, there is not a lot of action pre-Normandy, the narrative avoids being dry and repetitive. Again, quotes, anecdotes and mini-biographies/vignettes are used to good effect to break up the day-to-day reporting and present a very readable, extensively referenced account. This is how operational histories should be tackled. 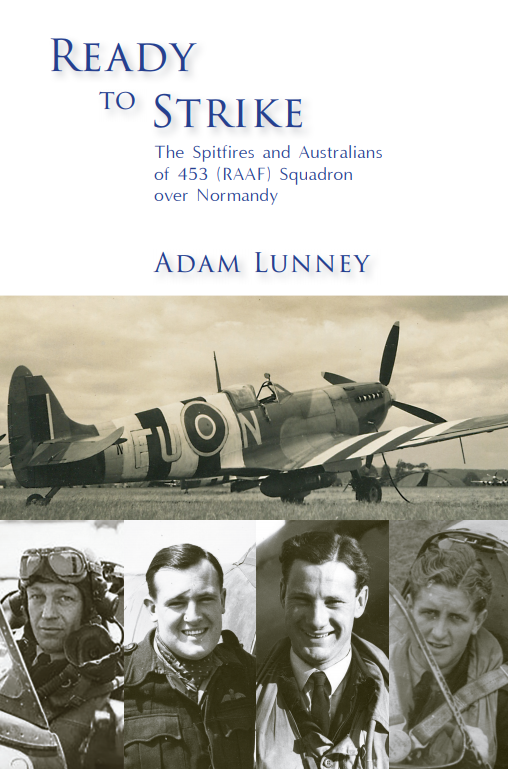