Waiting 'round the Bend

A Life in Australia's Foreign Service

He became a member of the Senior Executive of the Department of Foreign Affairs and Trade, Consul-General in Bangkok and Tokyo, Minister/Counsellor and Consul-General in Washington DC, and High Commissioner to Sri Lanka.

From a rich enough bush heritage and a sometimes testing childhood in hometown Australia, the river of his working life rounded many bends and delivered experiences which ranged widely from dangerous and ugly to exhilarating, humbling and humorous.

His recollections provide a candid, refreshing and at times irreverent insight into life in Australia’s Foreign Service.

About 9/11 and beyond…‘Compelling.’ ‘The major publishers are not much interested in the kinds of ‘awful truths’ that we are writing about.’ Noam Chomsky–eminent US academic, dissident, philosopher and author

‘… he has an engaging style and a real flair for storytelling.’ Gareth Evans–former Australian Attorney-General and Foreign Minister

‘… a gripping assessment of … 9/11 and its truer place in history.’ Russell Lansbury—Emeritus Professor, University of Sydney

He has ‘… a gift for narrative … that’s a pleasure to read.’ Phillip Adams–broadcaster, writer and public intellectual

Books about international relations are written from a variety of levels and perspectives. Some are from the lofty heights of policy making and negotiations. Others reveal more of the human side of diplomacy. Drawn from over 40 years in Australia’s Foreign Service, Howard Debenham’s book does both – and more. It recounts a fascinating array of experiences and adventures throughout a career which included eleven overseas postings in nine countries as well as during his time as a member of the Senior Executive of the Department of Foreign Affairs and Trade in Canberra.

The book has a powerful autobiographical narrative which starts with his family’s bush origins, the modest, though at times challenging, circumstances of the author’s early years and his chance beginning in the Foreign Service when he had to choose between it and the life of a patrol officer in Papua New Guinea.

He provides highly engaging accounts of surviving serious threats to his life, his direct experiences with hijackings and massacres, a rogue elephant and the untold, often harrowing, tale of the role of Australian consular officials abroad in helping Australians in trouble. As High Commissioner to Sri Lanka in the mid 1990’s, he was quite evidently at dangerously close quarters with the key players in and the horror of the civil war. So it is not surprising that he provides such a clear-headed and insightful take on the somewhat murderous politics of this, including up to today.

Similarly, his direct involvement as Consul-General in Washington DC with the events of 11 September 2001, uniquely equipped him to not only describe the day as it unfolded, but to provide a gripping assessment of the meaning of 9/11 and its truer place in history. This is masterfully expounded in the final chapter and makes the book a compelling read for anyone interested in foreign affairs.

As noted on the dust jacket of the book by Phillip Adams of the ABC, Howard Debenham has a ‘gift for narrative’ and in the words of former Australian Minister for Foreign Affairs, Gareth Evans (with whom for a time Howard had a close working relationship), he has a ‘real flair for story-telling’. Indeed, the author is further distinguished by his ability to provide, throughout the book, instructive and easily digestible historical settings. 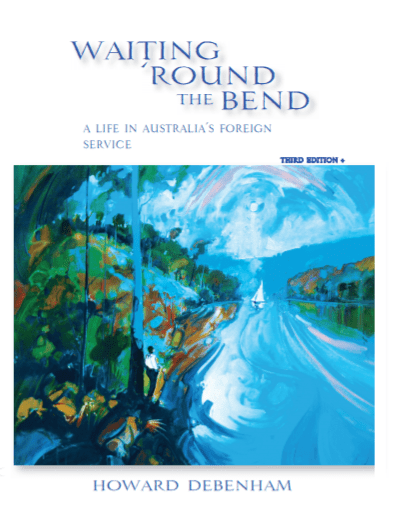