Does our world drive you nuts sometimes?

Then going bananas: vegan ninja 2 is the cookbook for you.

And much, much more.

It’s a must-read personal and global commentary that puts food in its place.

You could say it’s an ‘ecosophical cookbook’ as it blends ecological imperative with practical philosophy and daily action.

Your next meal is crucial.

If it’s meat-and-dairy-free your health, the animal kingdom and our planet will be smiling.

If not, the world’s not lost.

A plant-based life is one of the best things we all can do to save it.

And there’s so much more to this vegan perspective.

It extends well past our kitchen table to every aspect of our existence.

In this, his second book, Hunter Valley author Paul Maguire examines how everything, and he means everything, is connected.

He investigates what makes many of us mad at times – the hero worship of money, status, power, environmental obliteration, animal cruelty, political corruption and inequity.

Coal, plastics and the impact of mankind’s exploding population are among other matters examined along with the great horse manure crisis, burning Notre Dame Cathedral, a supermarket samba and yes, coronavirus.

Paul ponders how the smartest, most powerful species ever could also be so prodigiously stupid.

‘What’s the biggest threat to our planet and why do individuals these days feel so disempowered?’ Paul asks.

‘The answer lies in the gap between humanity and nature.

But waking up to a vegan life could change all that, Paul believes.

‘It enlivens your soul’, he said.

‘You see more than what’s on your plate, you understand the interconnected nature of all life.

‘Gradually your actions align with your feelings, small actions and big ones then produce astounding results well beyond their humble beginnings.’

Paul said going bananas: vegan ninja 2 aimed to combine serious commentary with the vegan mainstay – plant-based meals that are delicious and nutritious. ‘I’ve outlined, in the book, the main issues humanity faces because we have to have a realistic idea of what’s going on before we can best deal with it’, he said. ‘There are so many ways we can exercise compassion. ‘Life is not black and white, so we have to find ways to encourage diverse solutions for the ludicrous and toxic things our species is indulging in,’ said Paul.

All profits from going bananas: vegan ninja 2 will be given to wildlife and habitat preservation, education and solar power for disadvantaged communities.

Paul Maguire was born in Australia’s Hunter Valley and still lives there with wife, Julie, in a solar, rammed-earth home on four hectares. They have five adult children and five grandchildren. Paul has always been a passionate tree-hugger and has been vegan since shortly after the turn of the century. Corruption, waste and fake ‘progress’ are his pet hates. He is a former award-winning regional newspaper journalist and his first book, vegan ninja, was published in 2015.

Available now in paperback and hardcover

I've been reading the book (“going bananas”). Very cool. Bit of a literary flourish in parts, with a combo of reportage and opinion. The writing life will probably never leave us, even if we try to leave it! Once a writer, always a writer. – Damon, Journalist.

Thanks for our dinner inspiration tonight (Thai peanut and crispy tofu salad, from “going bananas”). We took the liberty to add some rice noodles. It was super delicious! P.S. Enjoying reading the book. – Michelle.

Your book ('going bananas') is a delight to read and I am thoroughly enjoying your stories and poetry. You express things beautifully and are quite insightful. Thank you. — Alana.

We recall our meeting and subsequent discussions very well. Your book (vegan ninja) was instrumental in being the trigger which converted S to being vegan and me also with the occasional exception of reverting to vegetarian on difficult occasions outside our home. It was really quite easy. — K and S.

Paul, how can you doubt yourself??? You never do anything by halves and this is near and dear to your heart so it’s sure to fly!! My friends are still enjoying and sharing your first edition. All the very best with it (going bananas) !! X — Mary-Anne.

YES!!! And, this time I will have a captive audience to read it to!!! My little one is going to become so enlightened! — E.

I just wanted to let you know that I’m loving the new book (“going bananas: vegan ninja 2”). Thank you. And can you please bring me another one (for a friend). – Karen.

Hi Paul. Thank you again for dropping off your recipe book (“going bananas”). I gave it to my sister for her birthday (yesterday) and have already received the following feedback. “My new pot and recipe book already in use!! OMG the chai tea is delish! Please tell the author that I’ve been looking for a basic GOOD chai tea recipe for ages!!!!” So, I think we can safely say that the gift, ie your book, has gone down very well! Thanks again. Tara 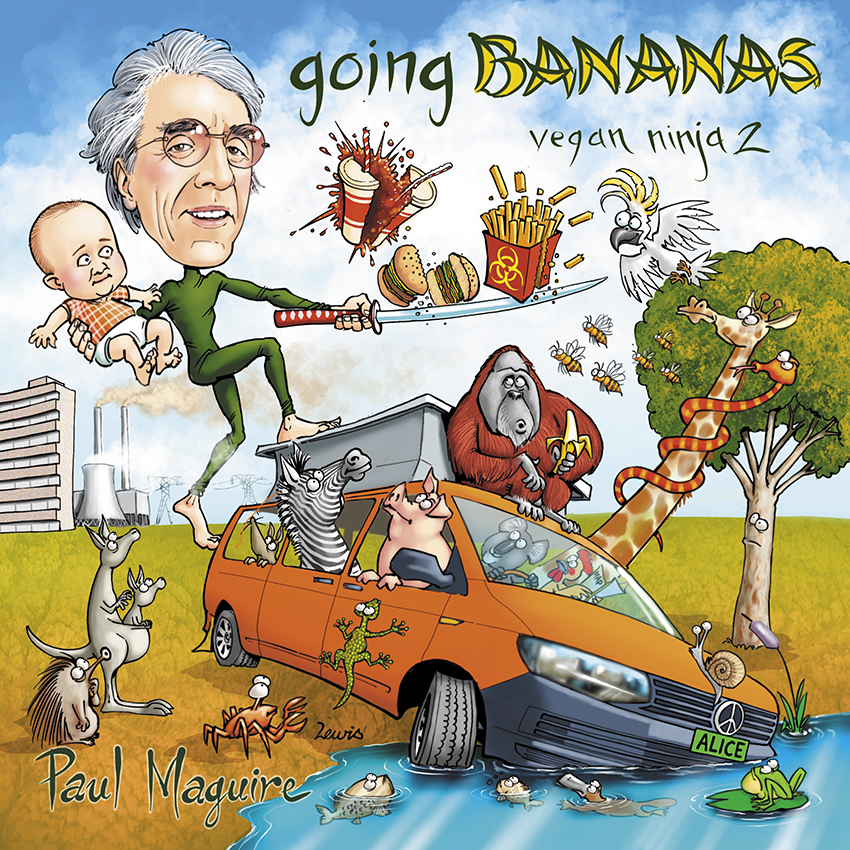