The extraordinary military career of Ted McPherson who came closer than most to changing history by mistake.

Kiwi Richard Granville McDonald has written a modern-day Flashman story, based on his own experiences in the British and New Zealand armies.

Ted MacPherson has survived the torments of Sandhurst drill sergeants, blackmail by Rudolph Hess at Spandau prison, encounters with prime ministers and presidents, near death at the hands of Somali warlord Mohammed Farah Aideed and entrapment by a Cypriot brothel madam. In between, he has found himself in strife with the army, with women and many forms of authority. It's a story about an antipodean larrikin who sails too close to the wind.

It’s a great yarn told by a man with a gift for storytelling.

Also available as eBook in epub/Kindle format (ISBN: 9780995367708) through the following booksellers

THERE is no more natural story teller than an old warrior, particularly one who has wandered - and fought - far and wide.

From the epic Norse sagas to a gathering of old diggers on Anzac Day, thereis a fund of stories of life, love and combat. Much of this fund is anecdotal, stories that are embellished with each retelling and which often sadly die with the original teller.

Fortunately, most old soldiers are fascinated with developing technology and manage to take to it with relative ease, whether it is a new weapon system or a computer. Thanks to the computer, more and more old soldiers are committing their stories to paper, stories which publishers have been happy to take up and print, and when no publisher is forthcoming, many of these tyro authors have resorted to self publishing.

The result has been a fund of readable and enjoyable stories which have added extensively to our knowledge and understanding of the soldiers way of life. Most are more than dry accounts of campaigns and a soldier's life, offering a more personal insight into the individuals who have coloured our military past.

An even when these stories are disguised as 'fiction,' many contain more than a single grain of truth. For example, George Mansford's self published 'The Mad Galahs' is a riotous tale of young diggers in the period from the Korean War through to Vietnam. The books main characters are very thinly disguised caricatures of the author and his contemporaries.

The latest offering in this genre is Close to the Wind, an equally riotous account of the fictional New Zealander Ted MacPherson, who is described as having been an officer in two armies - but a gentleman in none.'

Close to the Wind is written by New Zealander Richard McDonald published by Barrallier Books, a Canberra based boutique publishing house founded in 1999 by Ian Gordon, himself a published historian, and a senior serving army officer. Gordon has the historian's keen eye for a ripping yarn, and a storyteller's desire to ensure that such yarns are recorded for posterity.

McDonald, who has retired to his native New Zealand, graduated from the Royal Military Academy at Sandhurst in the UK, and served in both the British and later the New Zealand armies.

He served extensively as a UN peace keeper, and at one stage acted as a media spokesman for the UN. Close to the Wind's anti-hero MacPherson who had an equally adventurous career is described as 'idle, chauvinistic, drunken, lecherous and highly unreliable.'

Any similarities between the author and the character are entirely coincidental of course, but it is a well written, hilarious and irreverent look at military life. 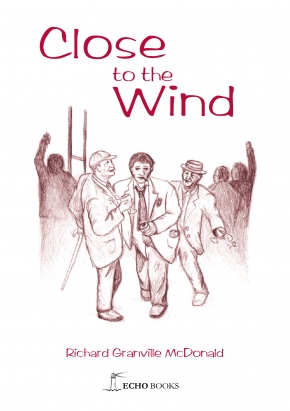