The return of the irrepressible Ted MacPherson

Eight years ago when Close to the Wind, the first novel by New Zealand author Richard Granville McDonald was published, it was read enthusiastically. On ABC Radio South Australia, it was described as: ’... this very funny, this extraordinary book’.

Close to the Wind finished on a cliff-hanger and now the sequel has arrived … and the question of what happened to Ted MacPherson has finally been answered. In Battered but Afloat McDonald presents a timeline of Machiavellian proportions which covers the first 12 years of the 21st century and it reveals MI5, Russian spies, Australian Prime Ministers, political double dealing and feckless public servants. They're all in the mix. It is a fast-paced roller coaster which finally sees the irrepressible Ted MacPherson, the central character, get his just desserts.

This book is terrific reading for the many who enjoyed Close to the Wind and have a keen eye, if not a little sympathy, for the antics and travails of an antipodean larrikin. 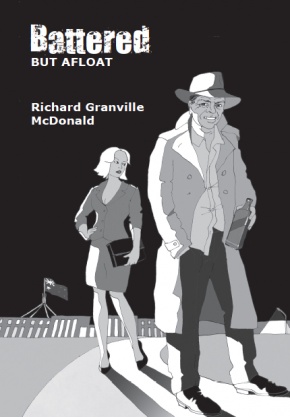