Australians in the Battle of Britain

These remarkable and courageous pilots fought the Luftwaffe in the world’s greatest aerial battle—the Battle of Britain:

‘It is not enough to celebrate the anniversary of the Battle of Britain. We must honour its obligations, particularly to the airmen who won this and other battles leading to victory’. Des Sheen

Kristen Alexander’s previous books Clive Caldwell, Air Ace (2006) and Jack Davenport, Beaufighter Leader (2009), as well as her many years as federal secretary of the Military Historical Society of Australia, have established her as a noteworthy researcher and biographer of Australian pilots of the Second World War.

The new Battle of Britain London Monument records in bronze 32 Australian airmen; in Australia, an additional three are officially recognised as participants in the battle. Ten were killed in action. In this latest work, the author (appointed Australian representative of the Battle of Britain Historical Society during the book’s production) tells the stories of five of these flyers and one ‘adopted’ Australian. Four of them, Jack Kennedy of Sydney, Stuart Walch of Hobart, Dick Glyde DFC of Perth and John Crossman of Newcastle, died in the battle. The two who survived – Des Sheen DFC and Bar and the recently deceased Englishman James Coward, who lost a leg in the battle – lived in Canberra, where the battle is annually commemorated in a ceremony at the Australian War Memorial.

The Battle of Britain itself needs little introduction here, except perhaps to note Winston Churchill’s assertion that “the survival of Christian civilisation” depended upon its outcome. Were it not for ‘the few’ RAF fighter pilots sent up against the onslaught of German air attacks through the summer and autumn of 1940, Britain may well have fallen.

Although the battle is among the most thoroughly researched periods of the Second World War, this is the first account of some of its Australian participants since Dennis Newton’s A few of the few (Australian War Memorial, 1990). The focus of Newton’s book, however, was a day-by-day diary of the battle. Lex McAulay’s biographical Six Aces (Banner Books, 1991) included a chapter on Les Clisby, killed during the London Blitz. Biographical accounts of Wing Commander Gordon Olive CBE DSC and Flight Lieutenant Pat Hughes DFC, too, have appeared previously, Olive for example having an entry in the Australian Dictionary of Biography.

Alexander has chosen some lesser-known pilots. As the book is a reworking of articles she wrote for 'Sabretache' and 'Wings', the biographies are brief in comparison with her earlier books. But in a short 25 pages or so for each, she has achieved a good balance of personal background, historical context and the post-war lives of the men, focussing of course on what she was able to uncover about each man’s part in the battle. Wartime letters and other family records, together with interviews with family members and with James Coward, form the basis of the personal side of the stories. The photographs are well-chosen and include images of some poignant artefacts: the ripcord handles from the two parachutes which saved Sheen’s life, and his bullet-holed leather earphone cover, to name a couple.

As former Chief of Air Force Air Marshal David Evans AC DSO AFC RAAF (Retired) wrote in his foreword, this book offers an insight into the 'insouciant attitude of a few Australian pilots and… the true meaning of the word hero' during what was both a desperate few months and a turning point in the war.

‘I have a knack of getting into and out of trouble’. So wrote Desmond Sheen in a letter to his parents after his second successful bale-out of a damaged Spitfire in 1940. Sheen was an Australian fighter pilot who flew in the Battle of Britain and was one of the survivors. He later recalled he had about 700 hours in fighters but only 20 minutes he would never forget. This was a common theme.

Each year on ‘Battle of Britain Day’, on the weekend closest to 15 September, veterans and representatives of today’s RAAF, and their families, gather in Hobart to commemorate the sacrifice of ‘the Few’ in the Battle of Britain. There is also a service at the Australian War Memorial. But why do we still remember a distant air battle with such devotion and ceremony?

Officially, 2949 pilots from Britain, the Commonwealth and other allied nations flew in the Battle of Britain, with 544 being killed. However, less than 40 Australians fought in the battle, 13 of whom were killed. Compared to the Australian contribution to the land campaigns in North Africa and Southeast Asia, and the efforts of the men of Bomber Command, such ceremony seems hardly relevant.

Perhaps it is the connection many Australian still feel to the ‘Mother Country’ and how we rose to her defence in her ‘darkest hour’. Perhaps it is the Australian characteristic of cheering for the underdog which appeals—or our respect for the hero who overcomes impossible odds. Maybe it was because the battle was the first time in history that the outcome depended solely on air power. Whatever the reason, those heroes of ‘the Few’ remain in our collective consciousness and we still remember them.

Australian Eagles: Australians in the Battle of Britain by Canberra author Kristen Alexander provides a further clue. The book is a biographical collection covering the lives of six Australian pilots who fought in the battle. Through these vignettes, we come to realise these young men were just like the many others who rose to the call. Their stories contain all the excitement, the expectations and fears held by that generation as they went off to a distant war. Through this book, they are portrayed as very human, not poster boys—they are just like today’s young men and women who go off to a distant war.

This book is Kristen Alexander’s third foray into airmen biography and Australian Eagles follows her books on RAAF World War 2 airmen Clive Caldwell and Jack Davenport. Both previous publications were well received and Australian Eagles should be likewise. Alexander’s sometimes forensic detail about her subjects allows the reader to fly with them in life and, in some cases, follow them down to their death. The book is well researched and a moving tribute to a few of ‘the Few’ and I thought was pitched at the right level and tone. Each is a very human story and often quite emotional. You cannot help be touched by the sense of loss felt by each family when told their loved one would not be coming home.

Each of the six has their story told using official records, personal documents and letters, and family interviews. Importantly for the stories, Alexander has taken great pains to trace the aftermath of the loss of four of the men and, in so doing, brought out the human tragedy of a wasted youth. I found John Crossman’s story particularly moving as Alexander describes the family reaction to his death and the drawn-out aftermath, not just with grief, but with the need to clear John’s debts with the RAF before personal items could be returned. In Crossman’s case, this took some time but, today, visits continue each year to his grave in Chalfont St Giles in Buckinghamshire.

Apart from Dennis Newton’s A Few of ‘the Few’ published in 1990 and released to coincide with the 50th anniversary of the battle, very little has been written specifically about Australians in the battle. Kristen Alexander’s Australian Eagles is thus a fresh reminder of their service and sacrifice and adds to the rich biography we have of Australian military airmen.

For those interested in RAAF history and the Battle of Britain, this book is not only well written and a great read, it is a must. Highly recommended. 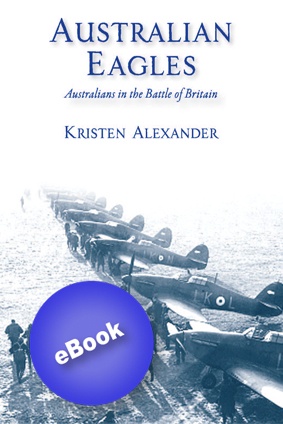