Ken McFadyen: An Artist at War

Vietnam on Canvas contains a rich balance of Ken McFadyen’s life, art and military service in Vietnam. 58 images of his paintings and charcoal sketches help tell the story of the day to day operations of the Australian Task Force in Vietnam.

The book contains 160 pages of the highest quality 135gsm Parilux Ivory Matt art paper. The book is covered with a 128gsm full colour french fold dust jacket. Vietnam on Canvas has been designed by Peter Gamble and typeset in Garamond premier pro 12/17 and Minerva scalptura fonts.

Read the chapter 'Cordon and Search'

Read the chapter 'And after Vietnam - civilian pursuits'

*Echo Books is an Imprint of Barrallier Books Pty Ltd

The full colour hardcover edition (ISBN: 9780648308294) is available through the following booksellers

This is a most interesting first book by Sandra Finger Lee. The author tells the story of Hon. Lt. Ken McFadyen, who at 37 years of age, became an official war artist serving with 2 RAR on their tour of duty in South Vietnam in 1968-1969.

The book really brings to life the wonderful work in pictures and sketches of Ken McFadyen on active service with the Australian army in South Vietnam.

While the beautifully presented pictures clearly illustrate the enormous skill of Ken McFadyen as an artist, Ms. Lee provides an excellent word picture of the many other facets of this remarkable man.

This was a difficult book to put down, a most interesting story about a very talented artist, including before and after his active service. For those who served with the Australian Task Force in Vietnam this hardback volume has to be a “must” for the bookshelf.

How successful Lt. McFadyen was both as a soldier and artist is summed up by his former C.O., BRIG Noel Charlesworth, “When he was dressed in uniform, stripped bare to the waist, his head shaven, he became a digger, and looked like any other soldier. But when he ventured out on patrol laden with army gear and armaments he was recognisable as an artist. His art—board would be strapped on his back and he would be carrying a few satchels of art materials”.

As a reviewer I must admit bias. Ken’s picture AFV Repair in the light green Vietnam November 1969 has pride of place at my corps officers’ mess. I had long admired it, without previously knowing about this talented and dedicated artist.

Sandra Lee Finger is to be congratulated for the work that has undoubtedly gone into the production of this excellent book. For the war artist Ken McFadyen, this volume can only enhance his undoubtedly high reputation both as an artist and man. 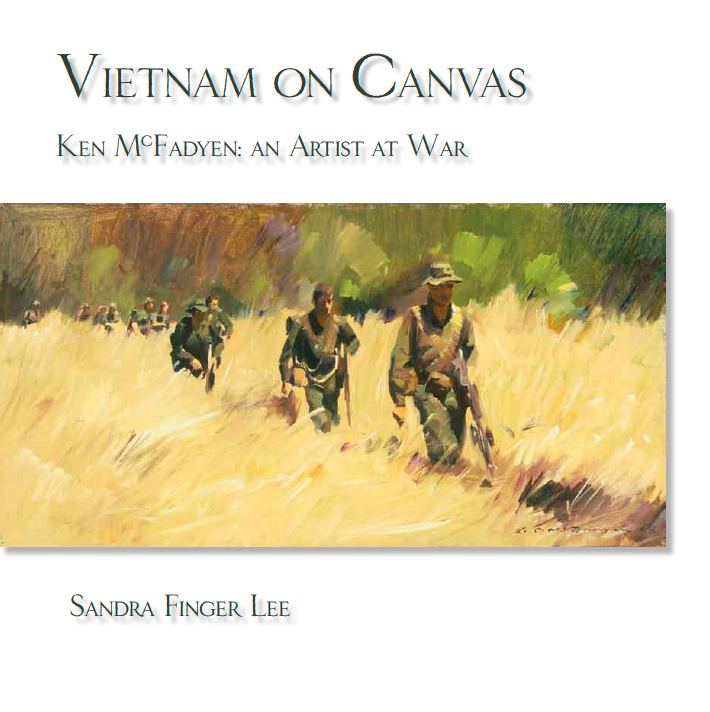