The true story behind the worst training accident in the history of the Australian Army, and how for 50 years, an entire nation forgot it ever happened.

In less than a second, 26 of Australia’s promising young soldiers were killed. Many were mutilated beyond recognition. Following an unprecedented outpouring of public emotion and grief, including a Royal message of condolences to affected families, the largest military funeral and coordinated interment of troops in Australia’s history took place just two days later. Then, inexplicably, for the next 50 years, Australia chose to forget the tragedy ever happened.

Based on the testimony provided to the Australian Military Forces, Court of Inquiry, by the very men and women who witnessed this horrific tragedy unfold, this story provides a chilling insight into the lives of the unfortunate victims, and explains just what went wrong that fateful autumn day in 1945 when an unexpected explosion tore open the heart of a country town, and stunned a nation.

Read a review from The Maitland Mercury, 1 June 2015

After more than 20 year’s Army service as a Military Police investigator, in retirement, Johnston discovered a military event totally unknown to him.

On Monday 21st of May 1945, a single explosion in an underground training bunker ﻿at the Royal Australian Engineer Training Centre at ‘Kapooka Camp’, nine miles from Wagga Wagga killed 26 of Australia’s promising young soldiers. Despite being the largest loss of life in a training accident, this tragic event quickly slid into oblivion for almost 50 years. This is the first book written on this tragedy.

The author has presented this fascinating account in three parts:

1. the background to wartime Wagga Wagga and the camp that housed 8000 trainee engineers after graduation from their Recruit Courses at Cowra, and the instructor involved, Sergeant Jack Pomeroy;

2. the events of 21st May, the identification of those killed, the Inquiry and the funeral on Wednesday 23rd May; and

3. his promise to the relatives of the deceased to preserve their memories by including individual photographs and biographies of all those who lost their lives.

The detailed location of individuals in SGT Pomeroy’s squad in the bunker was established from the one survivor from inside and one soldier who moved out a few minutes earlier. The battalion adjutant was forced to become an ‘amateur forensic pathologist’ to finalize the identities of the deceased. The funeral was rapidly organized because there was no way of preserving the bodies/human parts. No next of kin viewed their sons, thus protecting them from the extent of their mutilation.

A number of staff commuted from Wagga Wagga to Kapooka daily, so there was a close link to the permanent townsfolk. An estimated 7000 lined the town streets to see the funeral procession of four lorries bearing the 26 coffins.

The Inquiry was unable to conclude what caused the accident. The aftermath saw some of those involved suffering stress for the rest of their lives. After the 1992 ceremony marking the 50th anniversary of Kapooka’s opening, a granite plaque was laid on the site of the tragedy (by then private land). Three years later at a Commemorative Service the 68 year-old sole survivor Allan Bartlett returned to Wagga Wagga for the first time. In 2007 the granite plaque was moved to the publicly-accessible roadside overlooking the paddock that contained the demolition area.

Johnson examines the reasons for such a major event becoming obscure. The text is illustrated with numerous photographs of key individuals and locations, and includes a short comprehensive index. Whilst written without footnotes or endnotes ‘to eliminate reader distraction’, Johnston is quite prepared to share his research with anyone interested.

A valuable work that will enlighten military history buffs on the often-overlooked ‘home front’ during World War 2. 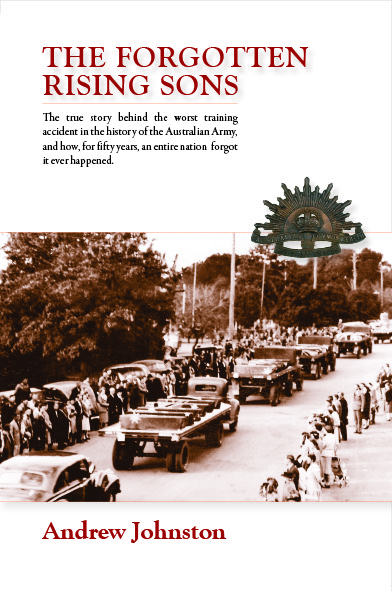